If this post was forwarded to you please subscribe to this life changing newsletter and become the Rooster and Mitochondriac:

As the Holidays have officially ended I wanted to talk to you about Children and the gifts that are truly destroying them (hopefully that you did not give to yours or anybody related).

The Four Horsemen of Death 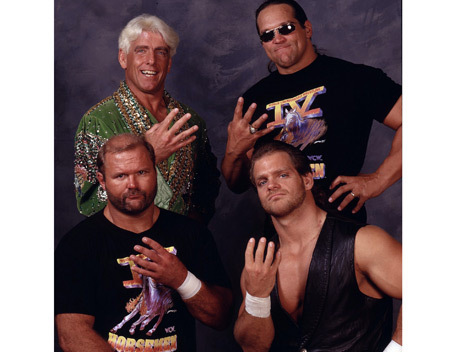 Obviously that's 5 but there were only 4 horsemen 😉 Whooo!

Ah yes more on the Electro-pollution–

Because it is the main cause of all the diseases we are seeing today in epidemic proportions.

How many of these do your kids have? How long are they using it?

How many DO YOU have? And how long are YOU using them?

You see technology is here, and the tech companies want you to become addicted because we have our whole economy based off of it to the tune of trillions of dollars produced directly and indirectly from it.

However, any addiction is not good. Especially one that brings about diseases of aging down decades younger– Multiple Scolrosis, Autoimmunity, diabetes, mental disorders, brain cancer, osteoporosis……….and of course obesity, all other cancers, heart disease, etc…

But there is also diseases of mindlessness, basically becoming a zombie. I hear so many people older than me always say enjoy these years with your kids you won't get them back, yet I see so many parents employing the Four Horsemen of Death as babysitters for their children. 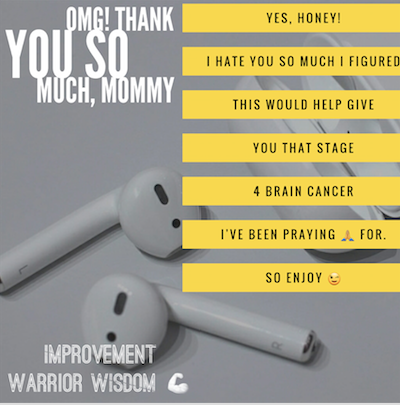 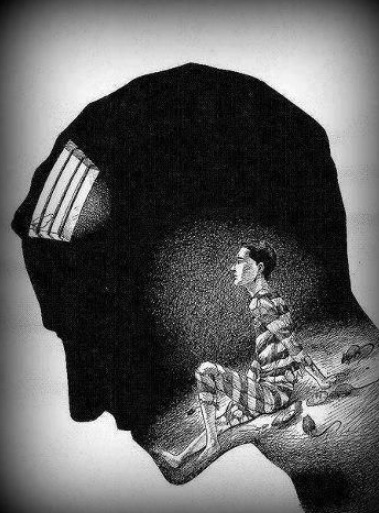 Stuck in a revolving door or a sequel to Groundhog's day where the same stuff happens day in and day out. The only real change that happens is that the calendar date changes and the weather changes……but they are trapped inside of their life. Prisoners in jail know their reality and know what to expect everyday….they did the crime and they will do their time.

However, out of prison, we have more options to dig our ‘cell' a little deeper. Make it a littler worse day by day and year by year. Making us age a little faster, get a little fatter, speed up aging, speed up disease, put us in depression a little more, take us away from little things.

ON Saturday, and most days now, after dinner, I set up the playroom and take my son up there. I do several things at this time. I either read, create educational memes on things I've read, mobilize my body, work, and play with my son/daughter. I was on the couch reading when he brought over his Tigger and Bobo the bear. He gave me Tigger and he had Bobo and Tigger for about 10 minutes we just bounced them up and down on the couch.

The playroom has no electricity in it. In order to get light and power in there I have to stream an extension cord down to another room with a plug that has power. The light is a Infrared Light.

My son is 21 months as of yesterday. My daughter will be 7 in July. For Christmas her favorite gift was a phone.

A Rotary Phone. That she pretends to talk on to an assortment of characters using her imagination, because we don't have a landline service. 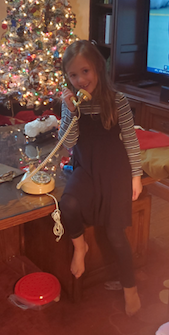 Imagaination is something that is being killed in our children by the Four Horsemen of Death.

Add wifi or Wi FRY to the mix as well. Then you got the toxic food most parents eat themselves and feed their children.

It is basically like we as a society as a whole are attempting to create an Apocalypse.

And if you are addicted to any of the Horsemen then you are one of the Zombies walking amongst the living. 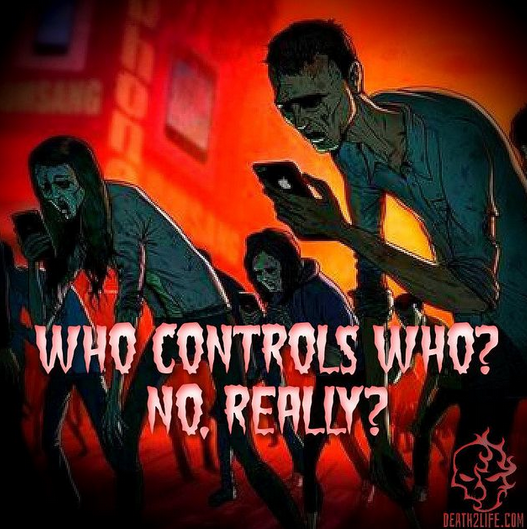 This is a fight.

And it is not over.

Forget 12 rounds. Forget 15. We have to go the distance. Whether it's 45 or 1000, or a million rounds. You may win some, you may lose some, it may be a draw, you may get knocked down again and again, but we have to keep going.

Where are you now?

Where will you be if you stay on this course for a year? 5 years? 10 years?

Will you even be alive if you continue this path you are currently on for 10 years.

A lot of people won't.

Where will your kids be?

Diseases of aging are sped up now due to this electro-pollution. Plus have we have sick parents mating with other sick parents………soon it will be those sick kids mating with other sick kids and on down the line. Expect genetic diseases to skyrocket too, but is it really genetics or is it epi-genetics turning on the shit genes and passing that down……Yes it is….. YES IT IS!

We have a respobsibility. As parents and as humans.

Tech kills and it kills our ability to be a parent. And to be a kid.

I grew up right when video games were just starting……..Artari, Nintendo, Genesis, PC games………. but me and my friends would be outdoors and off the games a lot more often than on the games…… not true today….and definitely not true in 2020.

It is our responsbility to learn HOW to use tech correctly then teach our kids how.

Because I have said it before and will continue to……..giving a child a cell phone is child abuse. If it isn't on airplane mode or they don't have blueblockers or a filter on it……it is no different then slapping them upside the back of their head.

But the slaps just keep coming with nnEMF and microwave and RF singals.

And you can insert any of the 4 Horsemen in that statement–airpods, Ipads, Iwatch, Video games……And don't think computers get a free pass.

If you have not read my video games blog post here it is.

But the reason I wrote it was a 12-year old kid committed suicide because of the game Fortnite. The game destroyed his dopamine levels and ultimately wrecked havoc on the entire family.

But I ask you, or if you know someone(s) who has any or all of the Four Horsemen of Death, how would it wreck your life and your family's life if your son or daughter killed themself, or was diagnosed with a glioblastoma brain cancer and has 6 months left, or suffers depression for decades and the only way they can deal with it is video games and food.

Just some of the major consequences.

What about just getting fat? 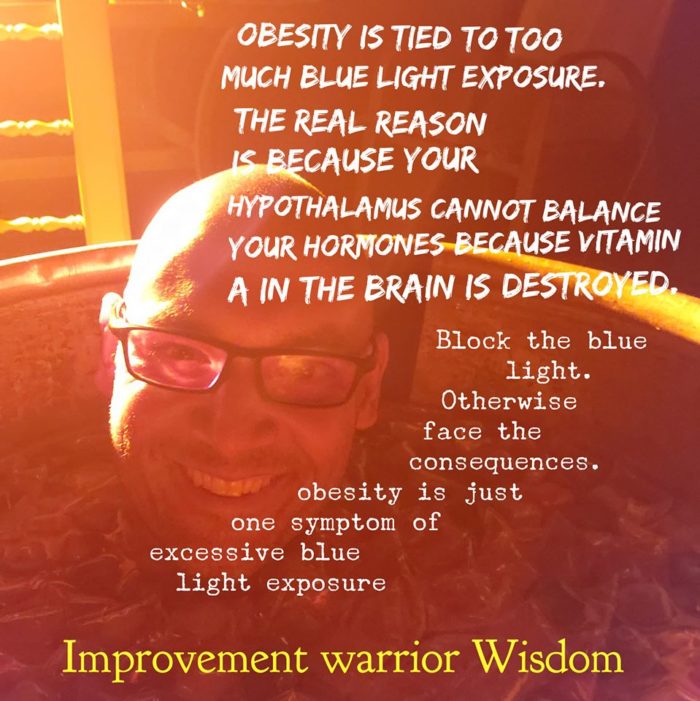 Fake blue light leads to a melanopsin/retinol dysfunction. That and a circadian rhythm malfunction can be tied to every disease. Every disease. 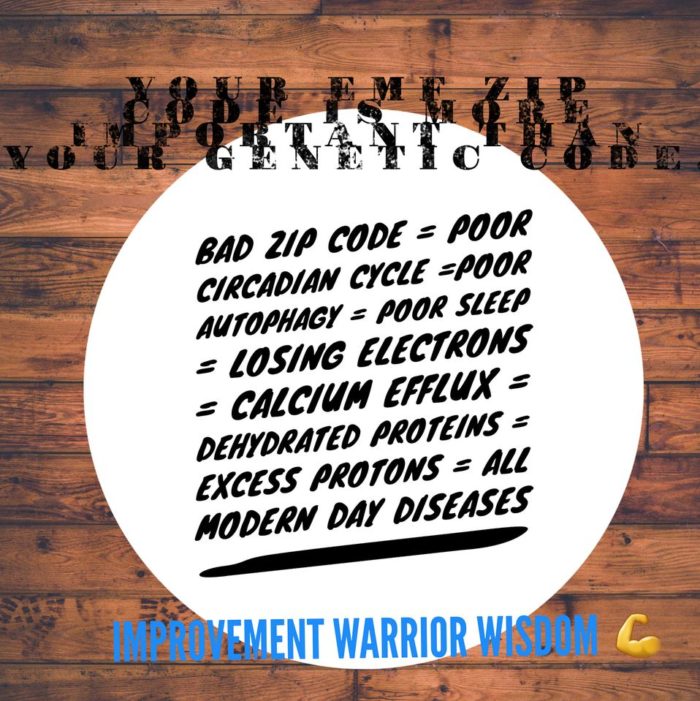 Airpods don't have any blue light coming from them……….
No they don't, BUT they do have RF, microwave, wifi, bluetooth signals coming in—even closer than when someone does the idioctic thing of putting a cell phone up to their ear for a call………
That radiation acts like a mircowave oven to your mitochondria and the water it makes. Mitochondria get dehydrated, calcium efflux, inflammation…….it doens't work anymore..>Circadian disruption…..the person using them stays indoors all the time> more disruption….mitochondria need sunshine……..Turn on the lights, turn on the TV, go to the grocery store> More Disruption.

An unhealthy life cannot be an optimal life.

So things may need to change.

I realize that parents don't intentionally set out to hurt or cause diseases in their kids 10-30 years down the road. They are just sold and marketed by companies that only care about their bottom line. You and your child or children are simply a number.

Things to change
and yes their will be resistance–the longer your child has had these the more resistance and rebellion you will probably encounter, but remember you are the parent, not their friend.

#1 The airpod and Iwatch need to go. Anything that stays on your body especially in the sensitive areas of the body (brain and wrist (known as the radiator of body) and emits RF and microwave frequencies is horrible for your health. Return them, sell them….get them out of the house.

#2 Educate yourself on how to use technology. It is not a free for all. The more you do use it then the more you will have to do to combat those effects. Smarter tech podcast, or Non-Tinfoil Guide to EMF.

#3 For the rest of the Horsemen– Phone, Ipad, Video Games– my Video game blog post has a set of rules for playing video games….those rules also need to apply to just regular phone and ipad use.

#4 Educate and talk to people who will be involved heavily in their life. I.e grandparents, gaurdians, split parenting, friend's parents, babysitters, etc…… Let them know there are rules that must be followed. MOre than likely they are technologically addicted themselves, so they will not understand, but make sure they understand your stance and that there will be consequences if no comply.

#5 School. There is a lot of virtual schooling. My daughter is in it now. A computer would be better than an Ipad. I purchased her a grounding cord from lessemf.com. I have one for my desktop and laptop as well, and bought one for my wife as well. She has Iris blue blocking software on the computer. And she must wear her day blue blockers from Ra-Optics while on the computer. She has to wear the Uvex orange blue blocking glasses when on TV or anything other than her computer that emits blue light.

We have to protect our children from dangers. And there is nothing more dangerous than the altered field we live in, that we have created all for the sake of progress and because you want to download your netflix bullshit faster.

The Four Horsemen of Death (smart phones, Ipads, Iwatch, Airpods, Video games) for a child are child abuse if rules are not set around technology use. If your child continues using them the same way after you have read this blog post then you are the abuser.

Change starts with you. 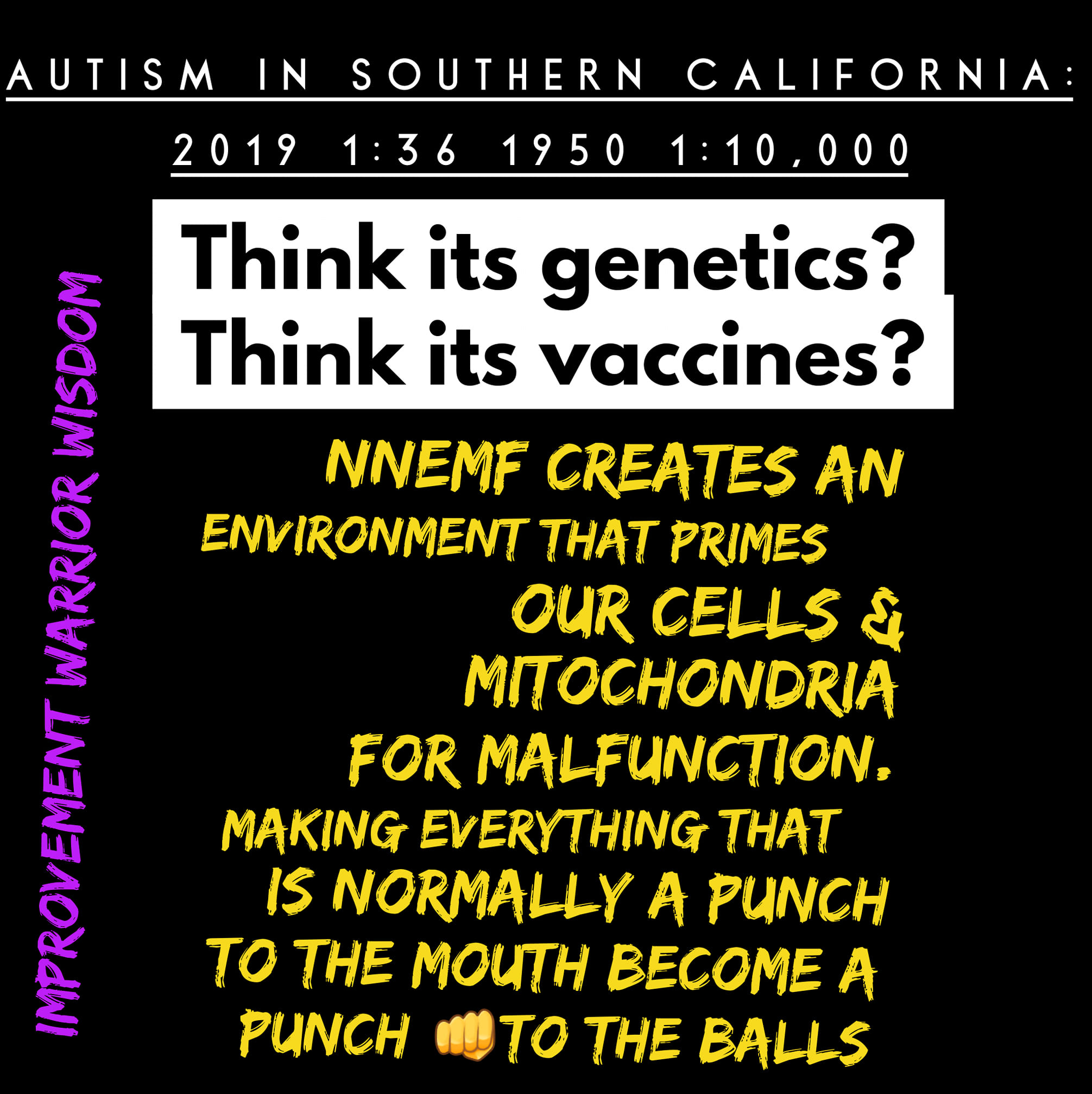 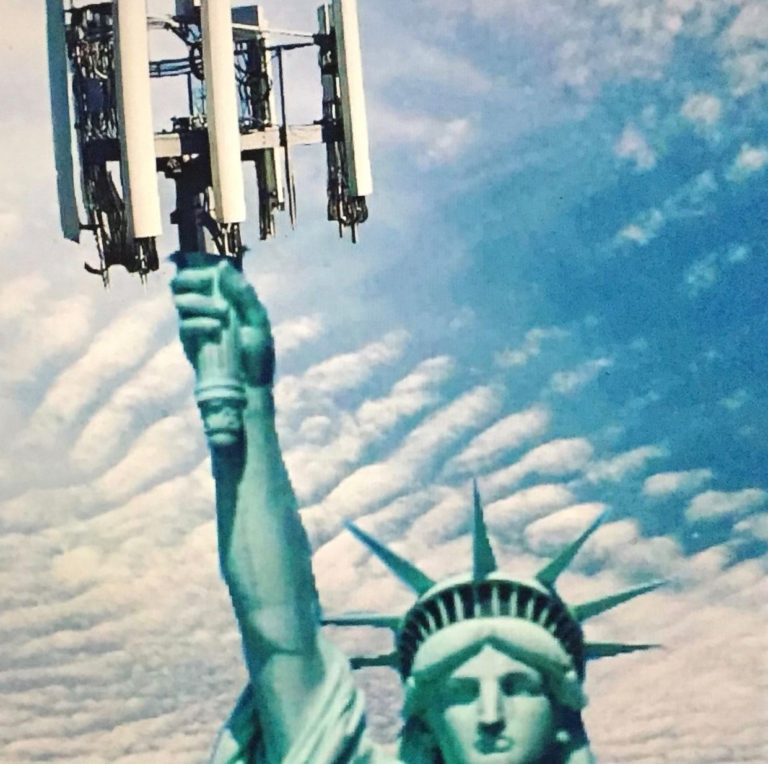 34-Day Light Challenge. Your Light Environment Is More Important Than The Food You Eat or The Exercise You Do!

.
Want to get started with your training with us? 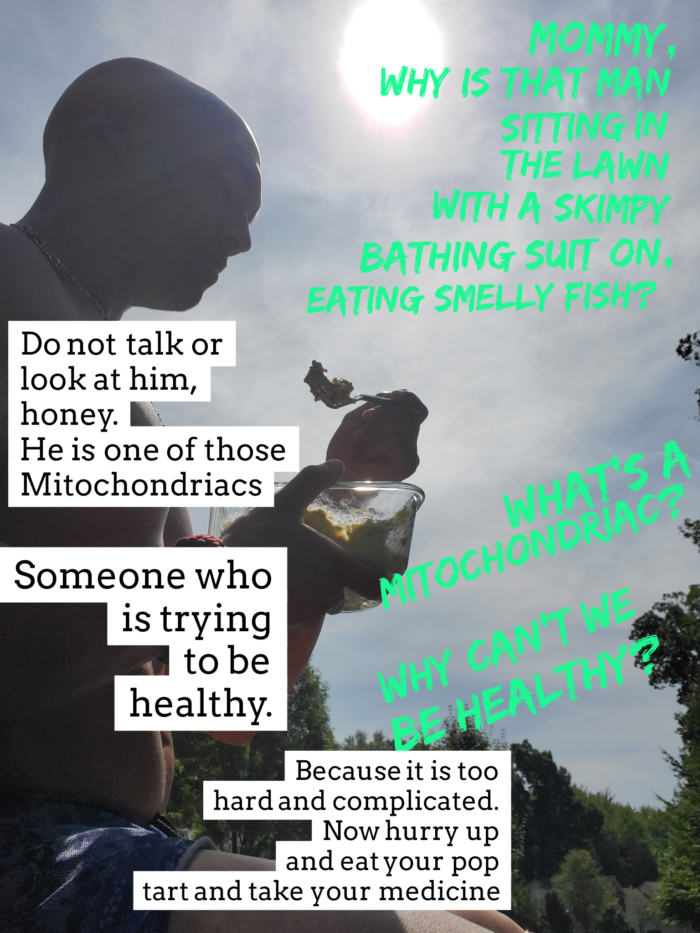 Download the free ebook taking you through 17 steps to becoming an Improvement Warrior and a Mitochondriac. Remember it is not just about Food and Exercise. Don't fall for the lies. Download here.

Love the content? Become a Patron on Patreon to support me and check out the other services about light, food, strength, and more! https://www.patreon.com/join/improvementwarrior?

Want to get started with your training with us?

Health, Fitness, nutrition information- Fill out your name and email below to join our newsletter

Not doing anything is not an option!