Hey what’s up its Jason Yun back in the kitchen again, gonna cook another healthy recipe for you. Today we’re making Feta and Spinach Scramble. What it calls for we need quarter cup of onions, and we are going to turn the oven to medium put some extra virgin olive oil on the pan, we’ll gonna cook up the onion first. We’ve got the onions cooking up. Next you wanna add 3 eggs or egg whites that’s because egg whites but I’m a firm believer that eggs are one of the best foods on the planet because I eat like 10 whole eggs a day. 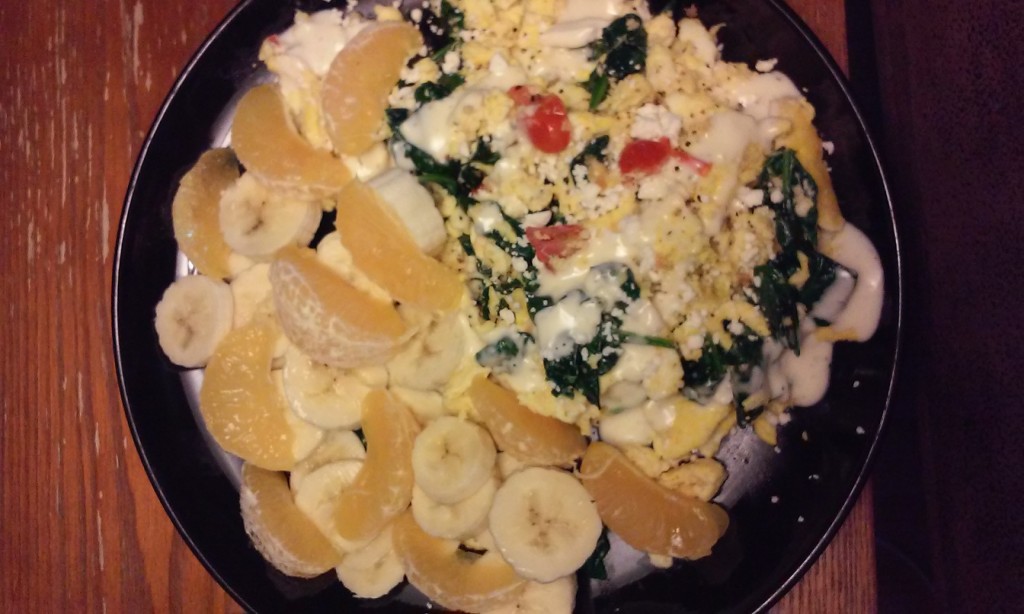 Blog Reader’s Ashley Grindstaff makes her own version of this recipe!

So we are putting actually 3 to 4 eggs in there and cook those up. Up next we’re gonna add half a cup of tomato and then you wanna add spinach as much as you need. Cook the spinach and tomato to the cider. Add spinach and spread around. And just before you are ready to take it off to the pan you want   throw in half the feta cheese in the quarter cup of feta cheese so your gonna take half of feta cheese and throw it on the pan and melt it and then were gonna slide it up on two plate and put in the rest of the feta cheese on. Alright, got it all cook up and put the half cup or half of the quarter cup of feta cheese on there. Put it on there will cook it up when cheese melts and put the rest of the feta cheese on. Gonna have a little oregano and light salt and that is almost finish. So there it is just setting the rest of the feta cheese over the top and that’s it, right next to my sweet potato got a whole meal here. Nutrition facts calories this is with the egg whites so with the whole eggs as about 90 more calories so it’s about 200 calories, 8 grams fat, 13 grams carbs, 2 dietary fiber and 16 grams of protein. With the whole eggs probably add some other 25 total.